The Turin Shroud is one of the world’s most enduring mysteries.  This famous linen cloth is held by some to be the foremost physical remnant of Jesus Christ, depicting the terrible wounds he sustained during his crucifixion. Whether it’s real or not has been hotly debated, with scientists, researchers, historians and other interested parties all offering their own studies or hypotheses in support of their beliefs. Indeed, it sometimes seems that the veracity of the Shroud is something of a tennis match, with each new study countering the previous one—and so on.

Therefore, it seems rather appropriate that this Christmas time, yet another study has released its findings in favour of the Shroud’s authenticity.

“Italian scientists have conducted a series of advanced experiments which, they claim, show that the marks on the shroud – purportedly left by the imprint of Christ’s body – could not possibly have been faked with technology that was available in the medieval period.

“The research will be an early Christmas present for shroud believers, but is likely to be greeted with scepticism by those who doubt that the sepia-coloured, 14ft-long cloth dates from Christ’s crucifixion 2,000 years ago.

“Sceptics have long claimed that the shroud is a medieval forgery, and radiocarbon testing conducted by laboratories in Oxford, Zurich and Arizona in 1988 appeared to back up the theory, suggesting that it dated from between 1260 and 1390.

“But those tests were in turn disputed on the basis that they were skewed by contamination by fibres from cloth that was used to repair the relic when it was damaged by fire in the Middle Ages.

“The new study is the latest intriguing piece of a puzzle which has baffled scientists for centuries and spawned an entire industry of research, books and documentaries.

“’The double image (front and back) of a scourged and crucified man, barely visible on the linen cloth of the Shroud of Turin, has many physical and chemical characteristics that are so particular that the staining … is impossible to obtain in a laboratory,’ concluded experts from Italy’s National Agency for New Technologies, Energy and Sustainable Development.

“The scientists set out to “identify the physical and chemical processes capable of generating a colour similar to that of the image on the Shroud.” They concluded that the exact shade, texture and depth of the imprints on the cloth could only be produced with the aid of ultraviolet lasers – technology that was clearly not available in medieval times.

“The scientists used extremely brief pulses of ultraviolet light to replicate the kind of marks found on the burial cloth.

“They concluded that the iconic image of the bearded man must therefore have been created by ‘some form of electromagnetic energy (such as a flash of light at short wavelength).’ Although they stopped short of offering a non-scientific explanation for the phenomenon, their findings will be embraced by those who believe that the marks on the shroud were miraculously created at the moment of Christ’s Resurrection.” 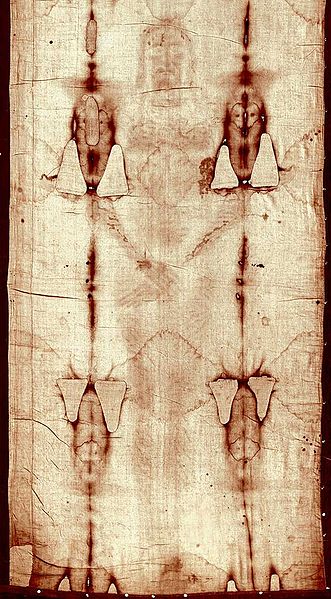 If you’d like to enjoy more real-life macabre places please check out my ebooks.

Writer. Excels at staring blankly, having bad hair and storing food in cheeks. Wrote Eerie Britain, amongst other things.
View all posts by MBForde →
This entry was posted in Bizarre, History. Bookmark the permalink.