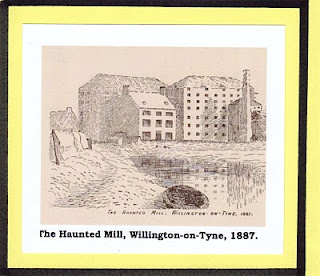 Now part of Willington Dene’s ropeworks, the Quaker-owned Willington Mill was one of England’s first steam-powered flour mills, but in the mid-1800s its fame became widespread for more otherworldly reasons. This sudden notoriety was due to its alleged “unnatural noises”, ghostly denizens and ongoing poltergeist phenomena. The creepy goings-on were observed by what one source calls “dozens of credible witnesses” and enthusiastic Victorian investigators flocked to the buildings to take a look for themselves.

The apparitions included an unnamed gentleman dressed in a white surplice who was seen looking out from one of the upper windows. Perhaps most terrifying though, was the lady that wandered the old mill’s corridors after sundown, mainly because she had no eyes in her sockets. This frightening figure was supposed to be a worker named Catherine Devore (Kitty) who was killed in a grisly accident at the mill when her long hair became caught in a millstone, causing her to suffer fatal wounds.

There is a millstone dedicated to her on the site.

Kitty doesn’t seem to be confined to her former workplace though, as she has been known to haunt nearby properties.

One man, a Mr Edward Drury, made ‘a detailed account’ of his experience at the Mill. From The Big Study:

“The phenomena Drury witnessed were the following: the pattering of many feet, knocking sounds some of which were right near him in the same room, a hollow cough [from a small, easily seeable empty room], and rustling sounds as of garments brushing against the walls ascending the stairs. All of these were mutually witnessed by himself and a friend that he brought with him. His friend dosed off, and Drury watched as a closet door opened by itself and a woman dressed in gray emerged, hands held as if to indicate something, and walked towards the dozing friend. Drury rushed at her, passing right through the apparition and landing unconscious upon his friend. He was taken downstairs in this state of confusion and terror [of which he remembered little–the testimony is by his friend and Mr. Proctor], and didn’t recover for three hours.”

Ray Summerson, a manager at Bridon Ropes’ factory, has gone on record to say that some staff still encounter paranormal activity to this day: “It is certainly a topic of conversation. It always has been and I’ve worked here for 32 years. I have sensed that I’ve been watched and I’m sure I’ve seen shapes or shadows before. One old employee said he was pushed in the back while he was working the night shift.”

Two authors from Tyneside, Mike Hallowell and Darren Ritson, have looked deep into the Mill’s history for their book, The Haunting of Willington Mill: the Truth behind England’s Most Enigmatic Ghost Story, and they claim that an unsolved murder case is the real reason behind the ropeworks’ hauntings.

“A lot of people in Tyneside are fascinated by local history. Everybody around here knows the mill or has heard of the mill ghost, but not everyone knows the truth.”

What that truth is…well you’ll have to read the book I suppose.

For more research into real-life cases please check out my ebooks.

Writer. Excels at staring blankly, having bad hair and storing food in cheeks. Wrote Eerie Britain, amongst other things.
View all posts by MBForde →
This entry was posted in Paranormal, Strange Places. Bookmark the permalink.